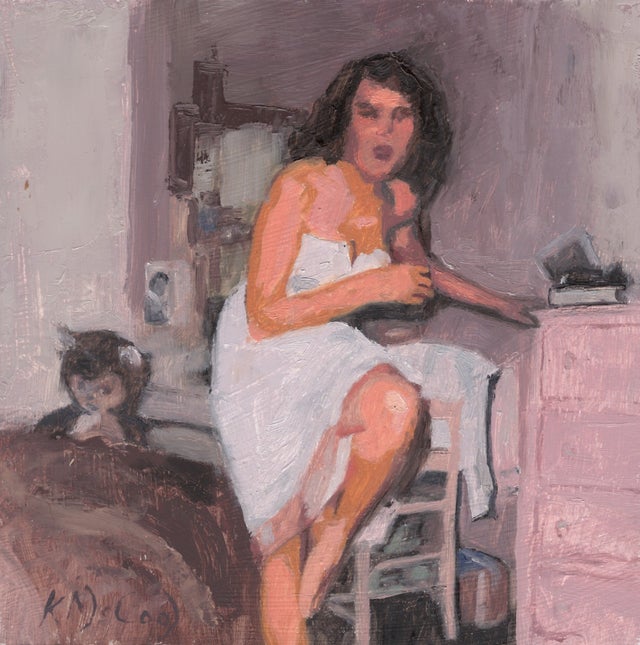 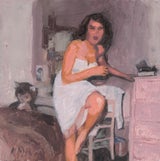 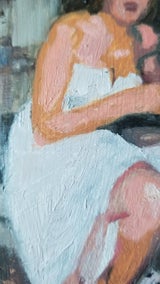 Get Out of My Room

I imagine the person who snapped this photo, was later the victim of a homicide. The photo was clearly unauthorized! They had to die.

When I was a kid there was a show called Candid Camera, which involved pranking people and video-taping their reactions. I hated that show. It made me paranoid about hidden cameras all over the place that could catch me doing something embarrassing, which would then be shown on TV for all the world to laugh at. So, thanks a lot TV. Way to make a little girl feel even more self-conscious.

Many thanks to @secretlifeofnell on Instagram for allowing me to use their photo as a reference.

That's right kids, before phones could send texts, take pictures, and play YouTube videos, we used them to talk to other people. And in my mom’s case, for hours at a time … can you even imagine? We had a phone on the wall in the kitchen with a super long chord so she could reach the sink and stove while still talking to her friend. I’m surprised her head wasn’t permanently stuck in a crooked position, for all the time she spent holding the phone to her ear.

When I was growing up, we didn’t even have an “answering machine”. So, if you couldn’t get a hold of someone, you’d have to call them *again*. I know. It was horrifying. Possibly the worst thing about this time was having only ONE phone number for our ENTIRE family. Truly, no idea how we all survived.

The original image is a “found photo” in the collection of @houseofmirthphoto on Instagram. Many thanks to them for allowing me to paint their photo.

I almost called this one “No, She Will NOT Make You a Sandwich”, but my husband didn’t know what I was talking about. Which I guess is a good thing, since the phrase, “shut up and make me a sandwich” is something misogynist trolls say on the Internet, when a woman has an opinion. ⁠

The title “Fragile Like a Bomb” comes from the phrase: “Not fragile like a flower, fragile like a bomb.” By Frida Kahlo. At least, I think this was a Kahlo quote. I asked, but Google wasn't quite sure. It might have been RBG. I was unable to confirm because Google sent me down a rabbit hole of "strong women" memes, which I have lots of opinions about. Now, I can’t finish writing my thoughts about this painting, because I have to go pick a fight with a misogynist troll on twitter. Thanks a lot, Google.⁠

The original image is a “found photo” in the collection of @houseofmirthphoto on Instagram. Many thanks to them for allowing me to paint their photo. The original was in black and white (which I love), but I decided to give this colorful lady some color.⁠⁠

What I love about painting these vintage photos is that they show us we are all connected through the thread of the past. And we're part of something continuous. They remind us that life is fleeting, but we can seize moments and feelings to keep what's vital from being lost.

Many thanks to @Houseofmirthphotos for allowing me to use her photo as a reference.

"Life is very fleeting, but has moments you should seize"

When I told my husband I was going to title this painting "Ride or Die" he didn't know what that meant. I couldn't believe it! I told him EVERYONE has heard this phrase, except maybe people over 80, and to prove it I called a friend. I was getting ready to kvetch with her about how totally un-hip my husband clearly was, since he'd never heard "Ride or Die" in reference to friends, and can you even believe I married this old geezer? and she was like... a ride or die what are you talking about?

So after I got off the phone with my former friend, (who apparently doesn't know whose side she's supposed to be on) ... I wondered if any of you had heard this phrase? Tell me it's not just me!

[Just in case, here's the Urban dictionary definition: Ride or Die was originally a biker term meaning if you couldn't ride you'd rather die. It has now changed to mean anyone (wife, boyfriend, best friend), that you will "ride" ANY problems out with them or "die" trying.]

So now you've heard this phrase right? Be sure to say that specifically in the comments below so I can screen shot them and text it to my husband. Thanks in advance.

for letting me use his reference photo.

This little girl isn’t leaving anything to chance as she hands her letter to Santa directly to the Postman. She’s going to get that damned bike, if she has to walk to the North Pole to get it. I like her chutzpah.

I found the original photo for this painting on the Library of Congress website but I decided to add a little color to it.

To All the Boys I've Loved Before

I couldn’t help but notice the body language of the boy in this painting. I want to tell that little girl that "he's just not that into you," but experience tells me, she won't listen.

Like so many, I was involved in an unrequited love situation in my teens. We've all been there. The obsessing and daydreaming ... I can only hope Remington Steele was able to move on. (I never meant to hurt him).

Many thanks to @secretlifeofnell on IG for allowing me to use their photo as a reference.

This scene looks to me like a little girl has stolen her big sister’s bike, and is pedaling for life. It immediately reminded me of my childhood best friend, and her evil older sister. The older sister who would have killed us if she knew how many times we went into her room and touched her things. That’s right. Put our dirty paws … on her things. She warned us to keep out. But we didn’t. (The seventies were a lawless time).

I was a bit torn about painting this photo. While I love the image, I can't help but think it was unauthorized. I’m still trying to decide where, on a scale of one to super creepy, the photographer might land. Possibly an 11. We’ll never know.

This looks like it was taken in the late 50s? Back when wearing grannie panties counted as bikini bottoms and you didn't have to suffer from a thong wedgie to look good on the boardwalk. I guess the 1950s weren't all bad.

The subject of this photo looks like she never eats funfetti cake. I, on the other hand, look like I don’t own a mirror. Thankfully now, in my mid-fifties, I have the body of a beer-drinker half that age. #winning :-)