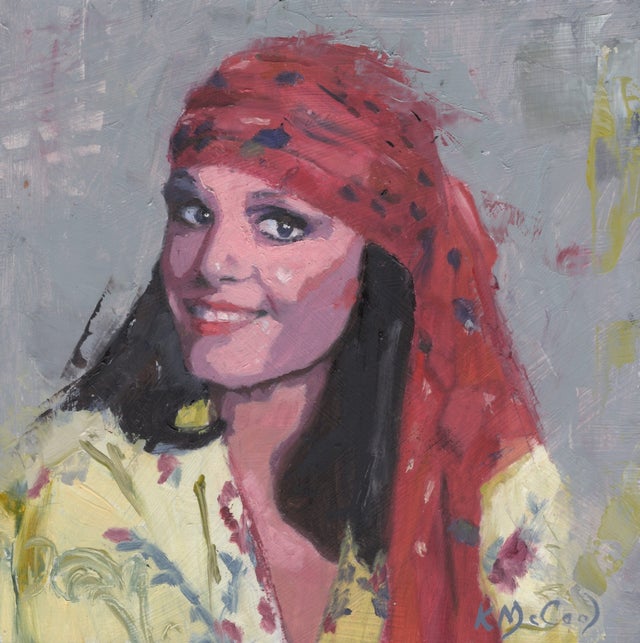 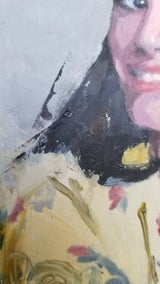 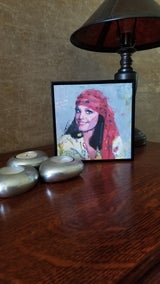 Rhoda Morgenstern - Mary Tyler Moore’s Jewish friend. My grandmother was Jewish and I remember Rhoda being the first Jewish woman ever seen on TV. (Of course, I also remember the kid I had a crush on in middle school, liking me back, so there’s that.)

While Mary seemed to have it all (Midwestern nice, spunky and had a successful career) ... Rhoda (brassy, wise-cracking, worried about her weight) was the rest of us … overall, just a little less put together, and I loved her for it.

I also loved her wardrobe. I don’t know how, but Rhoda made 70s fashion look good.

From the Netflix Series: Grace & Frankie.

If ever there were a champion of comedy … Betty White would be that Champion. With a capital “C”. I honestly don’t even know how Betty White has not yet been featured on a box of Wheaties. This painting got me thinking, there are two kinds of women … those who see the glass as half empty, and those who eschew the glass and fill their cereal bowl with Whiskey. Betty White is clearly in the latter category, and that’s what makes her America’s favorite spicy grandma.

I think I first saw her in the Mary Tyler Moore show, or was it the Carol Burnett Show? She’s been hilarious in everything I’ve seen her in, and I wish she would adopt me. The screen shot I used for this painting is from the TV show Hot in Cleveland, which started in 2010 and ran for six seasons.

I also love Ms. White for her dedication to pet and animal welfare organizations. The woman is a goddamned National Treasure. (When I was typing this, Microsoft Word warned me that, “This language may be offensive to your reader”. And I told Microsoft Word if they’re offended by that … they won’t be “my reader” for long, and it’s best to agree we can never be friends, sooner, rather than later.)

This one will be available at Teresa Haag"s gallery in September. Sign up for my email list to get a reminder and for more information. (Link in bio)

Things I wished I could be when I grew up: A private eye, an MI6 agent, a Jedi, and Lily Tomlin.

Lily Tomlin as Frankie (in “Grace and Frankie”) is the best Lily Tomlin.