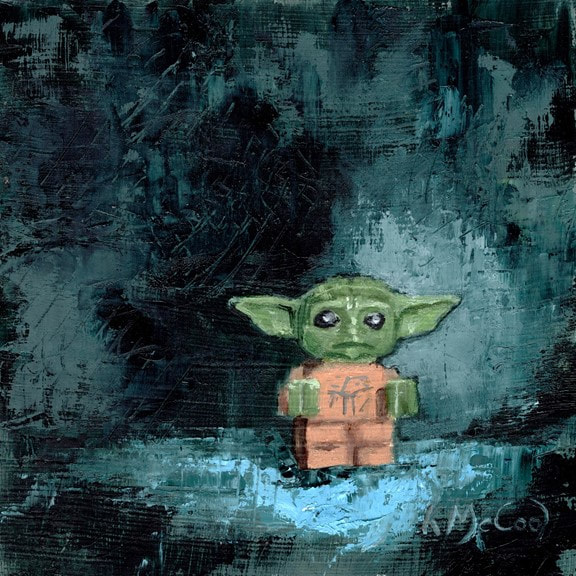 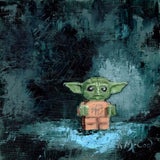 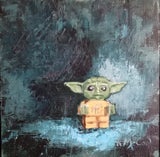 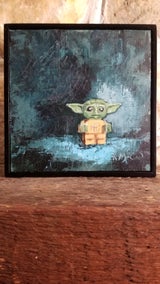 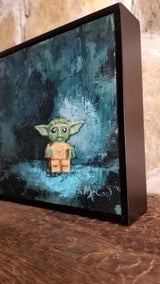 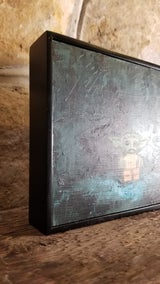 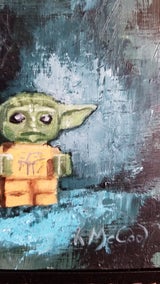 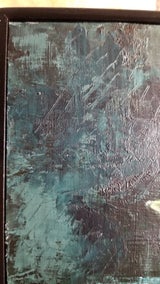 This LEGO minifigure is of the character known as The Child from the new TV series, "The Mandalorian". Here again, I don’t own this particular minifigure, but because Star Wars fans are awesome, a guy on reddit sent me a photo of his minifigure for me to paint. What? I can’t buy EVERY LEGO minifigure there is, or I wouldn’t have any money left over to buy art supplies.

You can't grow up, a child of the 70s and not be a fan of Star Wars. Or, at least, I couldn’t. Growing up as the only daughter, sandwiched between two brothers who had all the Kenner Star Wars action figures, an X-wing fighter, a landspeeder AND a death star, I pretty much had no other choice but to love all things Star Wars. Forget Malibu Barbie, and her stupid dream house, I wanted to play with Luke Skywalker and his lightsaber. Also, Luke could move things … WITH HIS MIND! Half my childhood was spent holding my right hand out in front of me, straining with effort to try to lift things using only “The Force”.

Is it any wonder I'm drawn to paint Star Wars LEGO minifigures? Star Wars minifigures are to me, what sunflowers were to Van Gogh, or waterlilies were to Monet. You can’t not paint what you love, no? (I bet Van Gogh only painted sunflowers because his brother, Theo, never bought him any Star Wars LEGO sets. Also, Star Wars LEGOs were probably ridiculously expensive in 19th century France.)

Building large scale LEGO sets seems to be extremely popular, during quarantine. I guess putting together complicated LEGOs is a great way to take your mind off a global pandemic. Oh, and murder hornets. And a contentious election with a divided country. And … pass me the red LEGO brick, please. :-/