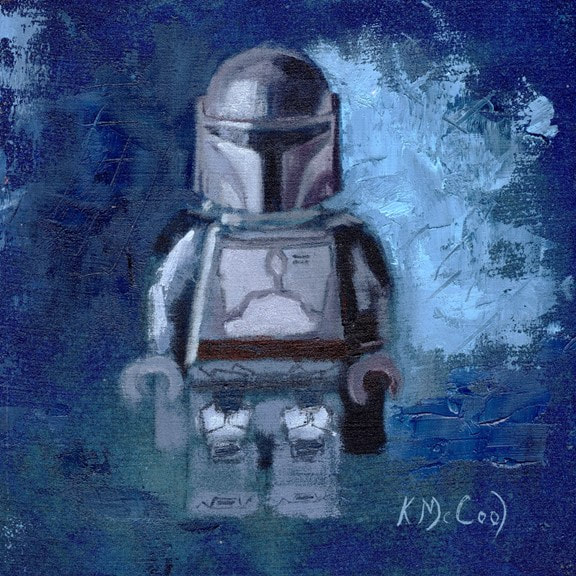 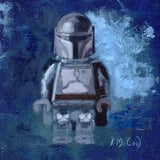 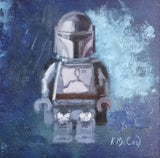 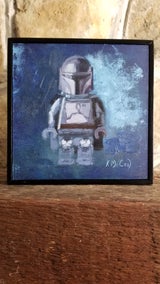 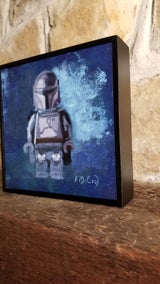 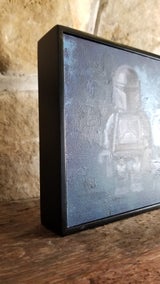 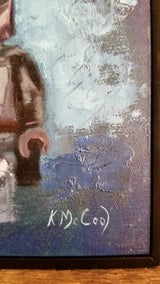 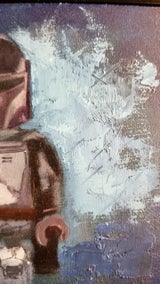 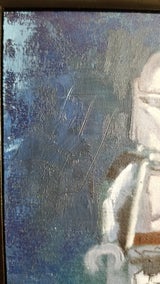 This LEGO minifigure is the main character in the new Star Wars series "The Mandalorian". Someone on reddit was kind enough to send me a photo of their “custom” minifigure for me to paint. He described it this way: It’s a “purist custom Mandalorian. It's 100% authentic Lego, I just swapped out some pieces to make a 'beskar armor' Mando (I used Jango Fett's torso, War Machine's legs, etc).”

You can't grow up, a child of the 70s and not be a fan of Star Wars. Or, at least, I couldn’t. Growing up as the only daughter, sandwiched between two brothers who had all the Kenner Star Wars action figures, an X-wing fighter, a landspeeder AND a death star, I pretty much had no other choice but to love all things Star Wars. Forget Malibu Barbie, and her stupid dream house, I wanted to play with Luke Skywalker and his lightsaber. Also, Luke could move things … WITH HIS MIND! Half my childhood was spent holding my right hand out in front of me, training with effort to try to lift things using only “The Force”.

Is it any wonder I'm drawn to paint Star Wars LEGO minifigures? Star Wars minifigures are to me, what sunflowers were to Van Gogh, or waterlilies were to Monet. You can’t not paint what you love, no? (I bet Van Gogh only painted sunflowers because his brother, Theo, never bought him any Star Wars LEGO sets. Also, Star Wars LEGOs were probably ridiculously expensive in 19th century France.)

Building large scale LEGO sets seems to be extremely popular, during quarantine. I guess putting together complicated LEGOs is a great way to take your mind off a global pandemic. Oh, and murder hornets. And a contentious election with a divided country. And … pass me the red LEGO brick, please. :-/

This painting has been sold, but if you are interested in commissioning a painting of a Lego Stormtrooper, please go to my contact page:

This was a commission for someone who liked my Lego minifigure paintings, but wanted one of his wife's favorite minifig, to give to her as a gift. Sweet.

This particular Boba Fett is from the UCS Slave 1 ship (Lego Set 75060). If you swipe left, you can see how much more detail Lego added to this minifig, compared to some others.

Also, I included a work in progress pic, so you can see my painting next to the original photograph, provided by the client.

Often, my paintings end up as a more saturated version of the original photo I paint from. They can be similar, in that way, to old photos shot with kodachrome film ... remember those? The film somehow exaggerated all the colors, (giving the middle finger to subtlety).

I LOVE old kodachrome photos. Truly love them. I'd be happy to share my last bite of dessert with them ... or if an old kodachrome photo asked me for help robbing a bank, I wouldn't say no. I'd first want to know why it needed the money. I have THAT kind of love for kodachrome.