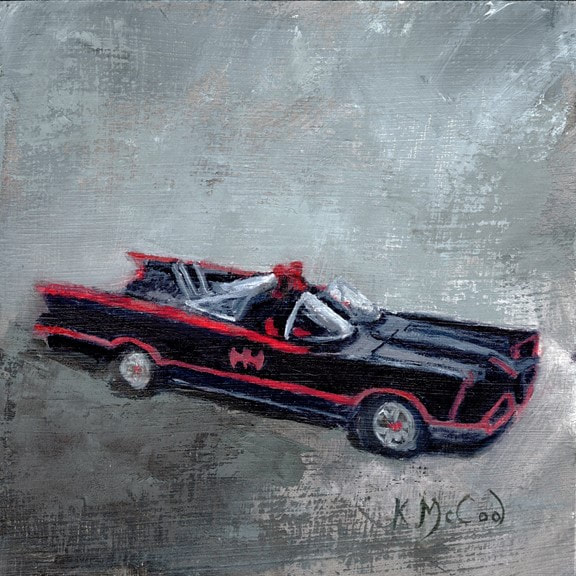 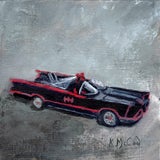 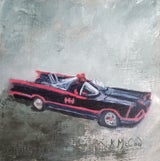 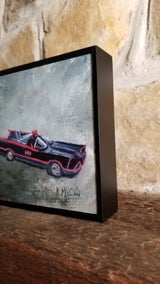 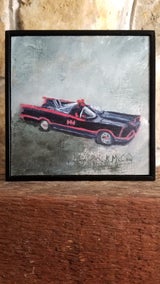 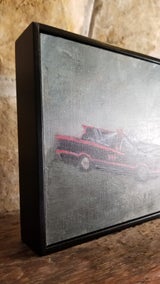 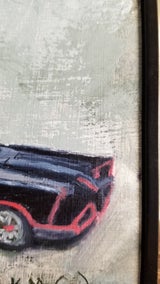 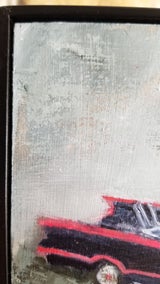 This painting is of the Batmobile from the original 1966 TV series. (I think I saw every re-run of this show as a kid.) To my mind, this Batmobile is the best Batmobile. I’ll have none of your tank-like, spaceship-looking nonsense from later Batman films. Just give me the original groovy Batmobile from the 60’s designed by the guy who also brought us, the Munsters’ coach, and the classic Beverly Hillbillies’ hooptie. I like my Batmobiles, like I like my TV shows. Campy.

About my Hallmark Ornaments Series

This oil painting was done from a Hallmark Christmas ornament. My entire Christmas tree is cartoon ornaments. I’m not immature, YOU’RE immature.

The Mach 5 was my husband's first car crush. He tells me that as a kid, he used to know the function for every single button on the steering wheel. I don't remember watching "Speed Racer" with that much attention, though it did make me want a chimp for a pet.

I switched my palette up a little for this painting (and for the Batmobile). I swapped out my usual burnt umber to the more neutral and earthy raw umber. Mainly because my husband is a raw umber kind of guy, and as it turns out, this is his favorite painting from my 25 Days of Minis.

About my Hallmark Ornaments Series

This oil painting was done from a Hallmark Christmas ornament. My entire Christmas tree is cartoon ornaments. I’m not immature, YOU’RE immature.