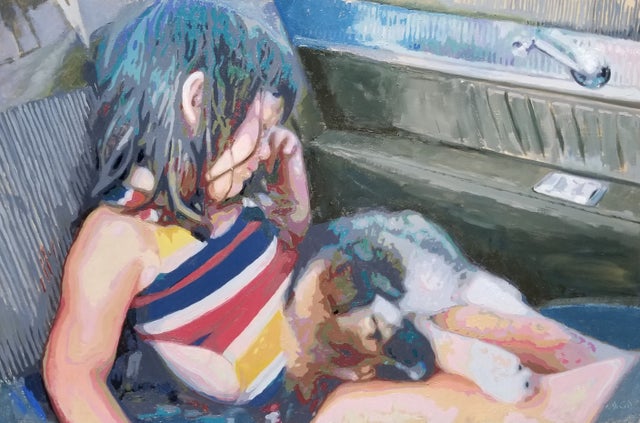 A Girl and Her Best Friend

A Girl and Her Best Friend

This image couldn't possibly be more 70s ... From the colors in her bathing suit, to the manual crank window.

The 70s were a nihilistic time ... when ashtrays were in every arm rest and seatbelts were optional.

I love this image so much. Partly because, other than the straight hair, it reminded me of me. To say i love dogs would be the understatement of the century. It makes all the other understatements embarrassed about calling themselves understatements. It's like saying the surface of the sun is a bit balmy, or Antarctica is a little chilly.

My first dog's name was Pierre ... which, at the time, i thought was a very clever name for a white toy poodle, but it makes for an awful stripper name, (mine's Pierre Burmont). And if you don't already know what your stripper name is (hi Dad!) ... it's the name of your first pet and the street you grew up on. What's your stripper name?

Many thanks to @dear.fran for allowing me to use her photo as a reference. If you love vintage photos ... Go follow her account.

Many thanks to @anonymousphotoproject for allowing me to use their photo as a reference. "The Anonymous Project is dedicated to collecting and preserving mid-century colour slides from around the world. Started in 2017 by filmmaker Lee Shulman, the project brings to light Kodachrome memories of found amateur photographs, taken from the 1950s through to the 1980s."